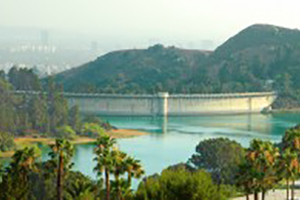 The Hollywood Hills are the part of the Santa Monica Mountains.